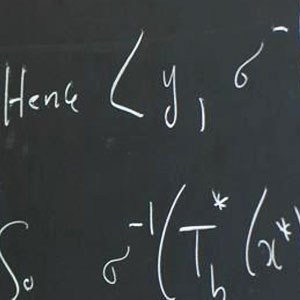 Here is a selection of some of the Research Highlights of the Mathematics Department (in approximate chronological order):

MingQing Xiao and Dashun Xu and John Reeve (SIUC, Zoology) have been awarded a 3-year research grant from the NSF for an interdisciplinary project in mathematical biology: Collaborative Research: Vulnerable hoststages, development time and host-parasitoid stability - The first experimental test. 2010–2013.

Jerzy Kocik co-authored (with A. Solecki) an article Disentangling a Triangle which won the Mathematical Association of America’s Lester R. Ford Award, $500. 2010. This award is given to the 5 best articles of the year.

Bhaskar Bhattacharva received a NSF Grant for more than $118,000 for the 3 years 2007–2010: Statistics and Information Theory;he also gave a 90 minute invited presentation:Covariance selection and multivariate dependence at the International Conference on Frontiers of Interface Between Statistics and Sciences, Hyderabad, India. 2009.

Dubravka Ban received a NSF Grant for more than $98,000 for the 3 years 2006–2009: Locally analytic representations and the Langland’s program.

Edward Neuman validated a chapter on Elliptic Integrals in the NIST Handbook of Mathematical Functions; he also serves on the Editorial Boards of 5 international journals; he also co-authored (with H. Kazi) the article Inequalities and bounds for Elliptic Integrals, Journal of Approximation Theory (2007). This article was selected as the number 7 article out of the top 25 hottest articles published in 2007.

John McSorley has more than 40 Combinatorial sequences accepted by the On-Line Encyclopedia of Integer Sequences (OEIS).

Henri Schurz has had more than 55 invitations from academic institutions worldwide.

Wal Wallis has more than 250 books and papers published in Combinatorics;he also was a Founding Fellow of the Institute of Combinatorics and its Applications, and is currently the Institute’s President.
Some of our past Ph.D graduates are now in prestigious positions: eg. Patrick Van Fleet holds the endowed position of Professor and Director of the Center for Applied Mathematics at the University of St. Thomas in St. Paul, Minnesota. Patrick Van Fleet completed his Ph.D under Edward Neuman in 1991.